Posting some writings from Dramabeans as there are those that would just like to read them and easier to lead them here to my blog.

When this month’s theme popped up, it was like javabeans and girlfriday peered into my soul, opened my subconscious, and said, “Ally, this theme is for you!” For full disclosure, I am not a writer, and I am barely a musician, but I do love music and I love K-dramas. You see, music was my first love. I’ve been studying it since I was four, and I almost became a performance major in college. I couldn’t give it up even when I was in medical school, and found another doctor to play duets with me in the atrium of the hospital. I was in a band or two, maybe three—that was a lifetime ago! And these are just thoughts from an amateur musician who would have been a professional if she weren’t too afraid that she wouldn’t be able to eat if she chose music as a career.

For me, part of the charm of K-dramas is the score—I wouldn’t love dramas as much without them. I’ve always been a soundtrack junkie. Even before K-dramas, I was (and still am) obsessed with musicals. Before the internet, I spent hours scouring cubbies of CDs, looking for librettos of songs so that I could learn all the words, sing them at the top of my lungs in my car, learn to play them on the piano, and cry with them in my room.

Then I became obsessed with movie soundtracks in college, and how their sweeping orchestral arrangements transported me into fantasy worlds far away. And finally, I’ve graduated to K-drama OSTs, with their ballads and background melodies which are relatively simple, yet stay with you long after you’ve watched the drama. 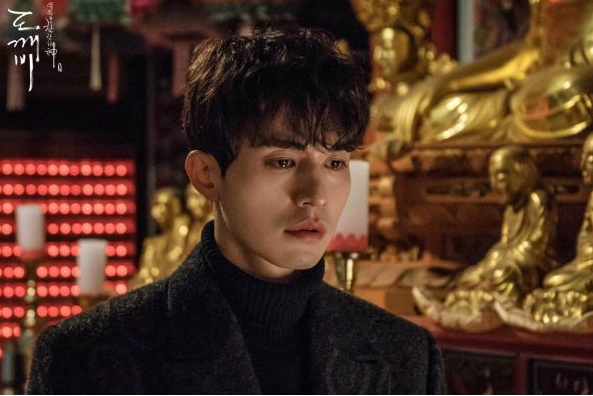 Music transcends all cultures, races, and genders. I don’t understand 99 percent of the lyrics in OSTs, but it never matters. It’s the music, the singer’s emotions while singing, and what the drama is portraying that gives it meaning. Play any song in any K-drama I’ve watched and I can probably tell you what drama it’s from. That’s how strongly music stays with me. It taps into emotions I didn’t know I had. I can go through life and live out tragedies and never cry. I have the emotional IQ of a rock. But put a soundtrack behind an actor who does one lip quiver, and I’m a blubbering mess.

A few beanies know this already because I’ve shared it on my fan wall, but the OST in The Lonely Shining Goblin affected me so profoundly that I found my love for music again. I never really lost it completely, but it had been so many years since I had really listened to music, really played it, really felt it. And now, I can’t get enough of it. I even went digging and found the obscure pieces, the ones not on the soundtrack—the ones that only the composer has on his personal Youtube channel, where he has like 100 subscribers, which now includes me! Every single track is amazing.

Every time I replay the Goblin soundtrack, I relive every look Gong Yoo and Lee Dong-wook acted out, every tear they shed, every scene they played, and my emotional IQ goes up 100 points. I become more empathic when I watch K-dramas, in no small part because of the music.

Not only this, but I hadn’t learned a new piece of music in over 15 years on the piano, until I picked up some sheet music that an angel on the internet had improvised and transcribed for the songs “Round and Round” and “Amnesia” from Goblin, and didn’t stop practicing it until I had mastered it in two weekends. I drove my entire family batty, because they had never heard me practice before! I forget to eat, forget to sleep, forget almost everything when I dive into a new piece—and now you know why some musicians are so skinny.

(Me playing) The Lonely Shining Goblin, “Round and Round,” “Amnesia”

Now, every time I play those songs, in my mind’s eye, I see the Grim Reaper and Goblin doing their model-walk down a dimly lit abandoned street, and the little-boy-turned-lawyer walking up the stairway to heaven, and I relive Sunny’s bittersweet pain of reuniting with her brother and her first love after so many years. Music conjures up these memories and images, and sets them apart from others because it taps into the core of our being, our emotions.

Music is therapy for me—even more than the dramas themselves, which I know is therapy for many of us. I even thought for a second of becoming a music therapist, working with children and the elderly, using it to bring them joy, work through their sorrow, and heal their pain. This is why we listen to music; a K-drama without music would just be talking, actors looking constipated, crying for no reason, and it would lose the emotional impact that we’re so familiar with.

Music is directly connected to the limbic system in the brain, the area that is responsible for our emotions. Without getting too technical, most music bypasses the decision-making parts of the brain straight to this emotional part. That’s why we feel music first, whether it sounds “good” or “bad,” whether it’s “sad” or “happy,” and we can all communicate about it without knowing any of the technical aspects. You don’t have to be a music prodigy to appreciate music, just like you don’t have to know anything about Korea to appreciate K-dramas. And together, when done well, they stay with you for a lifetime, and if you’re lucky enough to be an immortal goblin, for much, much longer.

2 thoughts on “September 25, 2017 [Music and Dramas] How dramas brought me back to my first love”

Ally– Our fearless leader and consummate hostess–it is her house we overrun. Able to cure a stuffy nose and watery eyes in a single shot!

Amy– Our experienced blogger and pastry chef extraordinaire. Able to secure a loan with one click of her pen!

Kimmi– Our loyal friend, who loves cooking and inappropriate humor. Able to make a car wreck disappear with one phone call!

Chi– Our retired halmoni, without kids of her own but adores all of us! Able to out drive, out chip, and out putt all of us with a stroke of her golf club!

NeNe– Our reluctant hobby farmer wife, may be inappropriate at times, but her stories make up for all of it! Master of words and rhyme, and can put you in your next dream home as well!

LadyInRed– Our wittiest, dryest humored companion. Ready with a punny joke at any time, and will likely save all our lives one day, whether from intoxication, stroke, or dementia–whichever comes first!

Shadow:  When she’s not at her grandkid’s ball games, you might find her with us.  And in a past life, she had the management prowess of any K-drama CEO out there!

Sunny: Our newest member, and the youngest as well!  But don’t let her fool you, she has more “power” in her little finger than all of us combined, and it’s nice to know someone who controls the power grid in town!

Honorable husbands:
Bogeyman and Phantom, in a bromance all their own. Phantom is a great chef and husband to Ally. Bogeyman is husband to Kimmi and apparently thinks we are doing a golfing blog.

Links or products on this site does not constitute an endorsement of these. We are not getting paid by anyone through this site and are otherwise gainfully employed through other means.